“And the disciples were first called Christians in Antioch.” Acts 11:26

St. James Orthodox Church was first established to serve those Orthodox Christians in Gwinnett County, Georgia, who have been commuting long distances to attend an Orthodox Church (or perhaps even not attending a church at all), and also to serve as a witness to those who are interested in learning about and becoming Orthodox.  St. James is part of the ancient Greek Orthodox Patriarchate of Antioch, where The Book of Acts tells us the first believers were mockingly called “Christians” (Acts 11:26).  We are part of the world-wide Eastern Orthodox Church community, which includes national churches in traditionally Orthodox countries like Russia, Greece, Romania, Serbia, the Middle East, and India but also many other countries that you might not expect.  There are over 250 million Eastern Orthodox Christians in the world today and over 1 million in the United States.  While many Orthodox churches in the U.S. continue worship in the original language of immigrant populations, an increasing number of Orthodox churches now have their services in all or mostly English.  The services at St. James are all in English and are meant to meet the spiritual needs of the Orthodox faithful regardless of ethnic, national, or jurisdictional background.

St. James first began as the "Gwinnett Orthodox Mission" and had its first Divine Liturgy in a classroom at Mountain View High School in Lawrenceville on March 3, 2013.  It wasn't long before we outgrew that location and moved to our current location on Horizon Parkway in Buford.  Our attendance has been steadily growing since then, and we are prayerful that our next move will be to a permanent location in our own building.

Whether you are an inquirer or a visitor from another Orthodox parish, please know that you are welcome at St. James.  Many of the members of our congregation journeyed to the Orthodox Church from other Christian faith traditions and denominations and some non-Christian religious and spiritual traditions.  So whether you are “on a journey” or just wanting to visit a local Orthodox parish, we would be honored to have you join us for prayer and worship. The Life of the Church Today

Thursday, 5 May 2022
An Apologia for Triumphalism 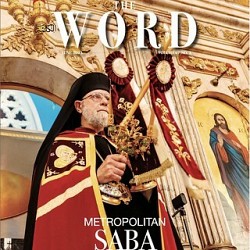